Enjoy using RCMF? How about a wee donation to help us keep you in the style to which you've become accustomed?

Last post by David M - December 19, 2020, 20:52:56 pm
I thought I'd revive this interesting thread. I seem to be the only ic heli flier in my Borders club now. I still fly my 20 odd year old (never crashed!) Raptor 30 V1 with it's OS 32SXH. The other two heli fliers have mega expensive massive FBL EP Align 700's. They are both very capable 3D fliers whereas I just try and fly around as smooth and scale as possible.

I think I enjoy my Raptor most on calm frosty days, it just floats about as accurately as anything I've seen flown. It's still equipped with a basic yellow csm180 gyro and Futaba 148 servos across the board. The OS hasn't missed a beat through many hundreds of flights (it's original TT36H died around 2002-3). I actually replaced it's OS no.8 plug this year as I thought I should, the last went in 10+ years ago.

I bought a 3D used but well maintained EP Align 450 this January. It has a BAR FBL head and flew very smoothly for a few months, but gradually it's developed a collective up glitch. I've replaced receiver to no effect, checked all screws, connections etc and now wonder if the FBL box is faulty..? The previous owner included the original FB head and gyro, so maybe I'll try that next.

Last post by cheddar-caveman - December 14, 2020, 08:58:05 am
Like you JohnP, many years flying RC models and I found the Cub very natural, if a bit sluggish! So glad Matt decided to sell his Catalina share rather than the Cub!
93

Last post by The Stig - December 13, 2020, 21:25:10 pm
Back to the Catalina, on a trip to Anchorage I asked at the Golden Lion Bar if there was anyone who would take  a few limeys up in the air for a bit of sight seeing .
The chap who came up trumps was a guy called Ron Humblehiemer??  It turned out he was the pilot of the Confederate Airforce Catalina which he had just flown back from Australia where it was on ANZACS day show.

His day time job was a recovery pilot for an insurance company .I managed 3 flights with him , All memorable cheers

Last post by Mike_T - December 12, 2020, 10:17:16 am
A friend's brother in law runs a comparable outfit (coincidentally based down Southampton way) which also operates those 'remorquer'-style tug aircraft.  I understand they use a standard tug kit (it may be an ARTF - I'll try an find out what) which they extensively modify and equip with their own bespoke electronics.  They've been doing offshore oil platform surveys for some years now.
95

Why would you extrapolate like that when the article is about a good use-case for the drones - which they perform admirably. Sometimes it's nice to be positive, you know?

I did suggest using them to track fire breakouts 20 years ago over here, and brought it up again 10 odd years ago with the firefighters, they poopoo me off again, now finally they use them.

It's a shame that only war can advance technology,,
96

Last post by JohnP - December 12, 2020, 00:47:46 am
As well as flying my models, I very occasionally get the opportunity to jump into the right-hand seat of a full-size aircraft with a suitably qualifed pilot alongside me and go for a flight.  It just happens that the last two times have been in examples of the previous two aircraft pictured above.

In December 2016 I had an aerobatic flight in an RV-8.  It was a tail-dragger, not a trike u/c as in your pic,  and it was a rather more subtle colour too! A great experience,  I got to fly a loop, as well as flying much of the 'mundane' bits, flying over Essex towards the coast where we did the aerobatics, then back towards North Weald.

I'd had one partly-aerobatic flight some years earlier, with the same pilot, in a Jet Provost.  The RV-8 is rather different to that!  I was surprised how disorientating the stall turn was - I'd never been in an aircraft performing one before.  It always looks such a mild manouevre when I watch it from the ground.  The spin,  I expected to be disorientating, but it wasn't to anything like the extent I'd expected.

Then a couple of years ago I had a flight down at Shoreham in an old Piper Cub.  Technically it was an 'air experience' flight (a Christmas present) and the instructor conducting the flight asked if I'd done any previous flying.  I mentioned the various f/size planes I'd flown in and also that I flew r/c models.  I got some Kudos for that - he reckoned he'd had a couple of goes at r/c flying and couldn't figure how we managed with the orientation.

So I got a decent flying lesson in a vintage aircraft - possibly older than me.  On the way back he had me put it into a vicious sideslip at one point,  progressively more and more rudder, until I was on full rudder with opposite aileron - just to demonstrate it. It was a lovely old aircraft - very basic,  though I felt sorry for the poor guy who hand-started it - it took about 20 goes to get started.  They reckoned that apart from the ignition on the engine the only electrics on-board were in the radio!
97

Why would you extrapolate like that when the article is about a good use-case for the drones - which they perform admirably. Sometimes it's nice to be positive, you know?
99

Last post by paulinfrance - December 11, 2020, 08:13:11 am
That's actually frightening, next thing might be taking photos of speeding drivers, and even dropping bombs,,
100

Last post by cheddar-caveman - December 10, 2020, 22:25:30 pm
I'll certainly do that as and when he updates me! He's built a custom workshop/hanger in his garden and is just finishing off the electrics. I believe he already has a few of the panels so shouldn't be too long before the start.
He already owns a WW2 Piper Cub which has just finished a complete overhaul including an engine replacement at an airfield near me here in Devon and he hopes to come down next week to "take it home". 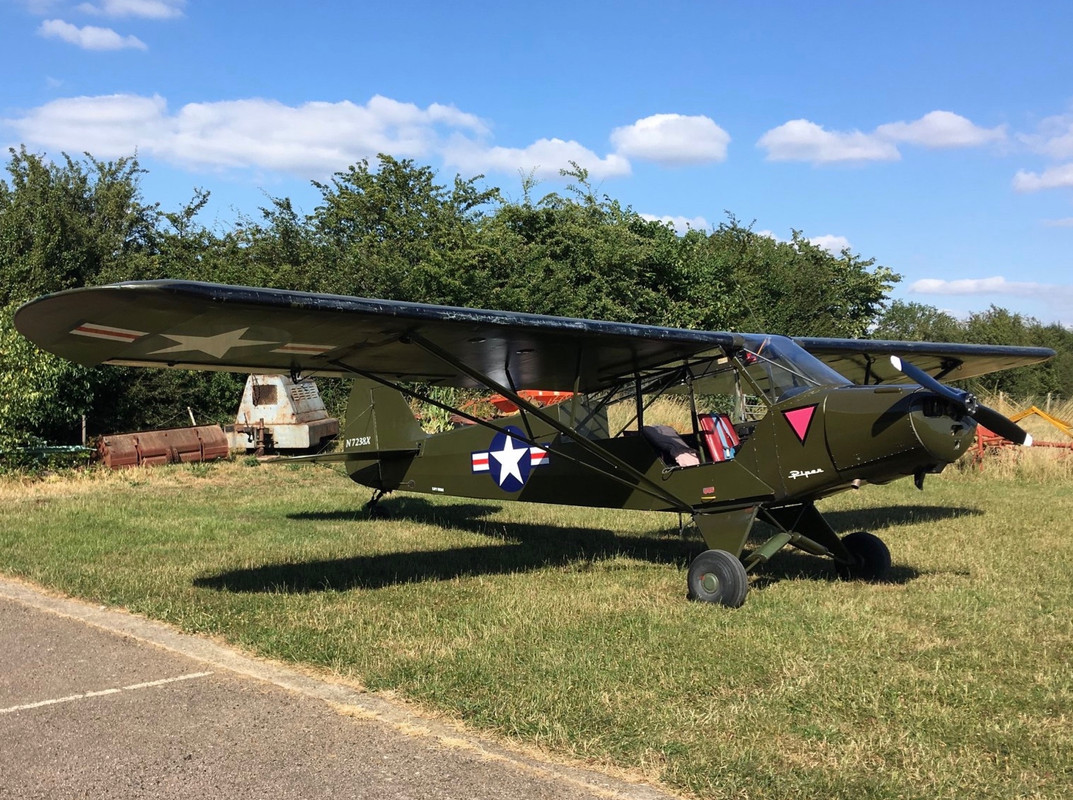